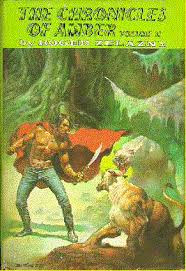 A group of persons with a strong ability to evade death under circumstances which would kill an ordinary human being, have been waging a war for domination/survival/salvation for centuries, using mainly swords or other types of cold steel blades. In the beginning, the hero (viewpoint character) is clueless, but as the story progresses he pieces his hidden identity and reveals the secrets of the universe and his own heroic nature, especially in times of hardship and pain, helping humanity overcome great dangers.

These are the common plot elements of both the Chronicles of Amber (Corvin cycle, first published 1970-1978) by Roger Zelazny, and the Highlander movie franchise (1986+).

While the Zelazny books weave a fast-paced, intricate tale with considerable consistency, the storylines of Highlander franchise lack the later.

For instance, the Amber characters rely on swords because laws of physics work somewhat differently in their home world, in particular, gunpowder does not have the same effect as on Earth, so they can't use firearms.

In Highlander, the only reason given for having swords as weapons of choice is the premise that only decapitation can kill an 'immortal,' and all other wounds, even from hundreds of bullets, heal soon enough. If a body can regenerate internal organs in a flash, why not grow a new head, too?

Amber characters have strong regenerative powers and immune system, but can be killed through any sufficiently severe wound or disease, which sounds more plausible to anyone with even a shallowest knowledge of anatomy and physiology.

Latter Highlander movies and TV-series pile more inconsistencies. The second part represents McLeod (Christopher Lambert) and Ramirez (Sean Connery) as alien exiles sent to live on Earth as punishment "for leading a revolution" on their home world - where use of firearms is abundant. No explanation is offered about the origin of all the other 'immortals', especially the evil ones, which number in hundreds. This also contradicts Ramirez's explanation in the first part, who simply states that they are a force of nature, part of the order of things ("why does the Sun come out"). Probably playing on the appeal of Scotch-spiced anglophobia to the American audience (think of the effect of Bravehart and the Patriot, in sequence), latter works introduced more Scottish 'immortals,' such as Paul McLeod.

In general, even the primary casting contains a charming inconsistency: Frenchman Lambert plays a Scotsman with not much of a Scottish accent, while Connery, a Scottsman nationalist, plays an ancient Egyptian comming from Spain, speaking English with a strong Scottish accent.

Excellent comparison. I've read the Amber series several times and love it every time. I also like the Highlander series, and view it in the context with which it is taken.

Wow, right on money! I am a huge fan of Roger Zelazny, and when I saw Highlander, I was always like "Wait, what, is this the Amber Chronicles, special retarded version?" Seriously, I tried to like the series for comparison to AC, but failed. It's just too stupid/lackluster.