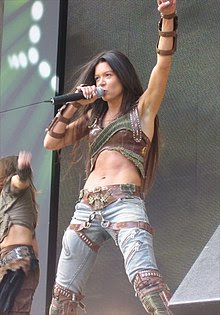 (2007) showed a move towards science fiction.

For instance, the Wild Energy video allegedly was based on the book Wild Energy.Lana by Marina and Sergey Dyachenko. Its current Wikipedia article presents the plot involving a person who works as "a pixel" in huge public entertainment shows, reminiscent of immense choreographed performances in North Korea or China, even though the same style of acts has been used in the West since at least the Olympics in Los Angeles.

The environment in the video shows clear influences of The Matrix, with high quality special effects and perfectly executed costumes and choreography. The video mainly deals with an escape sequence from futuristic agoraphobic architectural structures, similar to depiction of Neo's rescue in the first part of the trilogy.

The book's plot also seems to reflect the main motive of the Matrix: protagonist exploring the artificial reality imposed on the system and finding the truth about the inner workings of the economy, and constrains placed on the members of the society.

These values are present in the second video from the same album, The Moon of Dreams, with a storyline that returns towards general fantasy. The video uses natural phenomena on an epic scale as metaphor for the emotions of the protagonists, including climate changes and turning two dead moons into glowing stars.

The costumes seem to build upon some of the motives from Wild Energy, like the bat-people who do not personify evil per se. The video presents a long-distance conversation with the American singer T-Pain, who seems to play the role of benevolent spirit/remote conscience, and does not actively participate in the love life of the main protagonists, played by enchanting Ruslana and her dashing blond counterpart. The long-distance effect is stronger in the Ukrainian version of the song as each singer using her and his mother language.
Posted by Развигор No comments:

The League of Un-Copyrighted Gentry

I just enjoyed watching The League of Extraordinary Gentlemen (includes a woman), a comics-based tale of adventure and action, whose wonderfully rendered computer effects often have visual sensibility reminiscent of the best days of ID Software.

The movie is worth watching, in spite of heavy propagandistic shading & displayed misogyny. The story revolves around a group of 1899 ragtag characters who attempt to stop some arms merchants from 'promoting increased return of investment' by starting a world war. So far, progressive enough.

Sadly, the movie also glorifies imperialism, both British and American (its 'heir'), endorsing the idea that even though an individual person might not like an empire (disenchantment allowed for family reasons) s/he has to support it, since the interest of the (current) world empire coincides with the best interests of humanity and world peace. The movie portrays colonialism as benevolent and protective, especially in Africa (!); totally ignores the contemporary Balkan situation; and avoids considering the fact that, just as Washington warned, empire/alliance-building was the primal reason for the World War I.

Of course, the really extraordinary feature of this movie is that all characters come from works of art & entertainment with expired copyright, and are now in public domain. In order to fully understand the significance of this fact, here's a short excerpt from the site of the U.S. Copyright Office, from the document "Copyright Basics":

A work that is created (fixed in tangible form for the first time) on or after January 1, 1978, is automatically protected from the moment of its creation and is ordinarily given a term enduring for the author's life plus an additional 70 years after the author's death. In the case of "a joint work prepared by two or more authors who did not work for hire," the term lasts for 70 years after the last surviving author's death. For works made for hire, and for anonymous and pseudonymous works (unless the author's identity is revealed in Copyright Office records), the duration of copyright will be 95 years from publication or 120 years from creation, whichever is shorter.

Similar conditions refer to works created before the stated date. In short: the copyright (the privilege to prevent free use of certain product) may be extended up to 70 years after the death of the individual author, or up to 95 years since the publication if the copyright holder is a corporation.

This cute and fun movie would have been much poorer without the ability to re-use the characters and plot ideas ("raw materials"). League's success provides excellent proof for the need to revise the current, oppressive, legislature on intellectual property.

The movie also has educational value, providing a cross-section of some of the most important early Science Fiction & Fantasy works. Here's a handy list of (some of) the characters and authors featured in the League:

In addition, an inquisitive question from Deckard:

Do the authors of the movie have the copyright on their new universe? Do I have the right to use the same characters and write a sequel of the movie?

Posted by Развигор No comments: