The Andromeda Strain in Macedonian 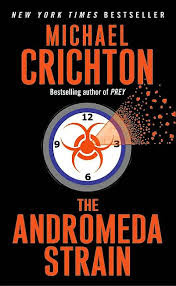 The previous post referring to Michael Chrichton's The Andromeda Strain prompted me to look up the ways this title has been translated by the Macedonian media. I reviewed several articles about Crichton, which appeared upon his recent and untimely death.

The novel has not been translated into Macedonian yet, and the translators who had no official yardstick to compare circled through various meanings of the English word "strain," failing to use the right one.

The word "soj" in Macedonian designates a breed, or lineage (of microorganisms). Thus, the proper Macedonian translation should be "Sojot Andromeda" (Сојот Андромеда). The book has actually been translated in Serbian several decades ago, as "Andromedin soj". The two South Slavic languages have the same word for this term, and Macedonia and Serbia were constituent parts of the Yugoslav federation then, making this issue accessible to Macedonian sci-fi fans at the time. But current translators display quite low level of general education, and probably have little experience with science fiction. Thus the translators from the Macedonian media translated "Andromeda Strain" as:

Posted by Развигор No comments:

It turned out that the recent fireball that streaked across the Texas sky wasn’t debris from the satellite crash over Siberia, but a meteor.

In context, I recommend (re)reading The Andromeda Strain, a great novel by Michael Chrichton. The plot is about a cornered group of people trying to confront the danger due to a satellite crash. It's very quick read, fast-paced and up to the point.

A seasoned sci-fi fan can also view it as prototypical piece of work that influenced numerous copycats, to the degree of turning into cliché. The recently deceased Chrichton should be credited more often as a major influence on popular culture in general. Bellow: trailer for the 2008 TV-series based on the book.

The book was published in 1969 and it's also interesting to compare the visions and interpretations of some then-futuristic information and communication technologies, which are commonplace today, such as automatic biometric identification, voice recognition, and instant communication.
Posted by Развигор 1 comment: