Probably the earliest depiction of a communication device resembling a laptop has been discovered in an ancient Flash Gordon comics by Mende Petreski of Prilep, Macedonia.

Browsing through his comics collection, Mr. Petreski stumbled upon a panel in Politikin Zabavnik weekly published June 14, 1974, featuring the forces of Ming the Merciless using a device which looks a lot like a laptop to talk to their leader. 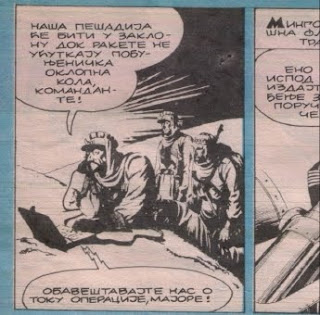 Translation: "Our infantry will stay in the cover until the rockets silence the rebel armored cars, commander" - "Keep us posted about the flow of the operation, Major!"
This particular comics represents a Serbian translation of an episode drawn around 1937 by Alex Raymond. The title the magazine used is "Ming's Prisoners", while the contents probably covers part of the story "The Outlaws of Mongo" which the Flash Gordon Wiki attributes to Alex Raymond and Don Moore, originally published as Sunday comics from August 15, 1937 – June 5, 1938.

The Wiki mentions the spacephone as a "communication device used on Mongo," but makes no mention about the laptop-like apparatus.

The leading Macedonian portal On.net broke the news of this discovery first. It can be of interest to computer science historians and comics lovers.


Flash Gordon comics were a major hit in Former Yugoslavia, published by popular magazines such as Politikin Zabavnik and Stripoteka. While the former had a tradition of republishing both classic episodes and reruns, the later usually featured newer installments by Dan Barry. 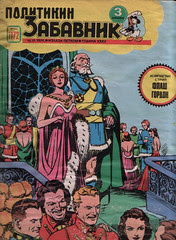 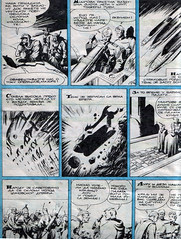 It looks a lot like my Toshiba, which has a webcam that I'm sure dates back to 1937 judging from the picture quality...

In "Foundation" by Issac A., the young mathematician meeting Hari S., has a portable computer that does symbolic calculus.
That was written in the 1950's.

The obvious origin of the com device in this flash gordon is the flat screen
"notepad" tv display in the movie 2001--from 1966.

I was born in Macedonia 31 years ago. It is in North Greece. The country you are referring to is called F.Y.R.O.M.. I know it is confusing.
Here's the United Nations link:
http://www.un.org/en/members/index.shtml

aatnet you are a living proof that Greek nationalists from 1903 have been using time travel to send their propagandists to the present.

Therefore it might be news to you that the people who inhabit the northern part of the geographic region of Macedonia formed a state in 1944, which joined the Yugoslav federation, and declared independence in 1991.

You should travel in space too. :-) Come to Republic of Macedonia, it's just north of the Greek border. Everybody's welcome here!

Развигор why exactly am i a propagandist? There is an independent state north of Greece, thank you Mr.Obvious. My post merely served to clarify that its name is F.Y.R.O.M and not Macedonia. Duh

I have a much higher definition picture of this cartoon, and you can see that it is portable field radio of the type in use at the time.

You can see the soldier holding a telephone-style receiver to his right ear.

Anonymous, please contribute to the discussion by uploading your image online and provide a link. You can do it with any free service like Flickr or TweetPic. Another reader suggested the briefcase radio explanation on Reddit.

One could see it as a premonition or foresee of the future:)

It's way much modern that my older laptop xD

We all know that this comic is clearly using an Apple Mac Book Pro. No evil force or heroic army would go into battle with one...

It is amazing that a comic book from the early 1900s could be so "on point" with the uses and portability of a laptop. These things remind me of the show "Get Smart" with Maxwell Smart's gadgets and also of Dick Tracey and his video phone watch. Now that I think of it, all these ideas have been out for a while, and even Nikola Tesla released wireless power in the early 1900s.

Dasi Mobile offering all types of Nokia mobiles with prices and all other mobiles also. Nokia models

Shoulder handbags are in unique quality and latest brands, our site has everything unique and cheap price with low price without no shipping fee. Shoulder Handbags

I like your style of writing. You break it down nicely. Very informative post. Keep up the good work.

You have done a great job by sharing this informative blog with us.

I bought fijn lichtgewicht hd action cam kruidvat . You can check this. Its really good and they are providing sale.